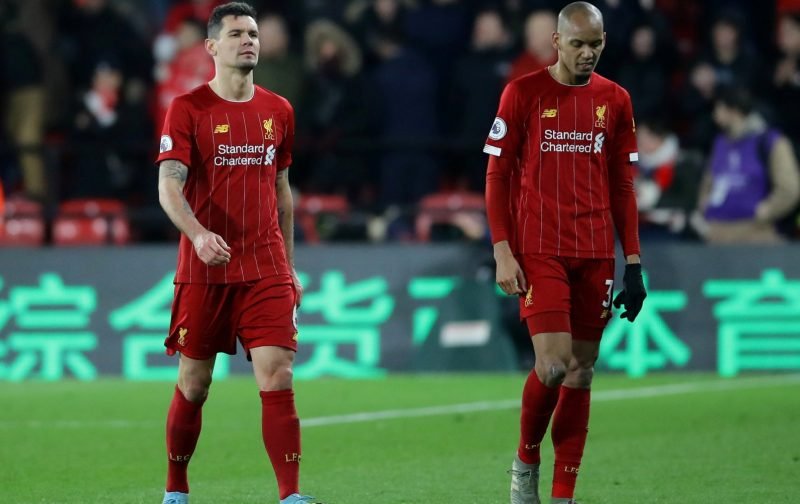 For a while, it seemed like Liverpool could genuinely be an unbeaten side and one of the greatest teams to ever be assembled in world football, but that fantasy has seemingly come crashing down.

Fabinho has been awful since he came back from injury, first goal was caused by him, he needs to get back to form and fast #lfc

The Reds suffered a third loss in 2020 as Chelsea dumped the Premier League leaders out of the FA Cup with a convincing 2-0 win, and for Liverpool supporters, Fabinho was the main culprit behind the terrible performance at Stamford Bridge.

The Brazilian midfielder gave the ball away to allow his international teammate Willian to score the opening goal, and the 26-year-old was also rinsed by teenage Chelsea prospect Billy Gilmour with a fine turn and pass late on in the second half, and plenty of Liverpool fans on social media were left fuming with Fabinho.

Fabinho has been awful since he came back from injury, first goal was caused by him, he needs to get back to form and fast #lfc

Fabinho came back to the starting lineup against Shrewsbury Town (away) in the FA Cup, then against Southampton at Anfield when we barely won, and the same against Norwich away and West Ham at home. And a disasterclass against Atletico and Chelsea. Coincidental? #LFC

Might be time to drop Fabinho unfortunately. Nothing against him but he is just very off color right now. He just doesnt look sharp at all. That 2nd goal he was just running besides Barkley. Positioning has been suspect too lately. Maybe needs some time on the bench. #lfc

Fabinho has been really poor since his return. Not even gunna talk about Lovren. But VVD for me has been so so poor on the ball the last few games. Too many touches, side to side constantly. He and Gomez are on the ball more than any other player for us, set the pace! #LFC

This is getting ridiculous!! Every team now plays like how we used to play. Keep it compact, hit us on the counter and beat our high line with balls over the top.

Fabinho doesn’t look the same player as before.

As you can see from the replies, fans are eager to see Fabinho be dropped from the XI for their upcoming Premier League tie against Bournemouth.