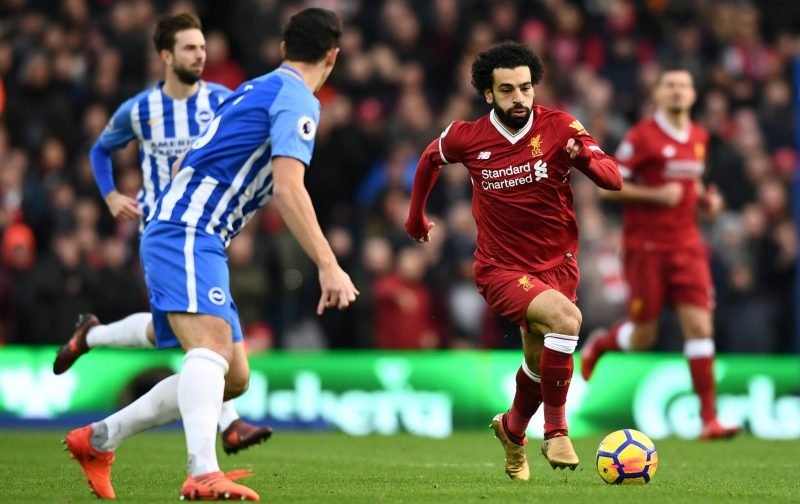 Liverpool completed an unbeaten 2017/18 season at home in the Premier League on Sunday with a 4-0 win over Brighton & Hove Albion.

The victory, coupled with a defeat for Chelsea at Newcastle United, secured a fourth-placed finish for manager Jürgen Klopp and his players and provided the club with the perfect send-off ahead of their Champions League final against Real Madrid in Kiev on May 26.

The Reds made a good start against the Seagulls at an expectant Anfield and could easily have taken the lead inside the opening 10 minutes had Dominic Solanke made more of a Shane Duffy mistake or referee Kevin Friend punished a clear handball by the same player moments later.

Duffy was even more lucky not to give away a penalty as the opening 20 minutes drew to a close when felling Mohamed Salah.

Liverpool’s best chance arrived shortly after when Sadio Mané went clear but his effort from a tight angle was straight at Matt Ryan.

The deserved breakthrough finally arrived in the 26th minute and the joy and relief of the fans and players was magnified by the identity of the goalscorer; Salah, who swivelled on a loose ball and fired low into the bottom corner, recording the record-breaking 32nd league goal of his scintillating debut campaign on Merseyside.

A truly phenomenal achievement given the names of the players he has surpassed – including Alan Shearer, Cristiano Ronaldo and Luis Suarez, with whom he had shared the 38-game Premier League record with for the past couple of weeks – and the fact he doesn’t play as a striker or have a goals return padded by successful spot kicks.

Chances to double the lead quickly arrived as the hosts threatened to run away with things; Roberto Firmino firing wildly over and Mané and Salah somehow combining to waste a one-on-one chance when the duo were both clean through and seemingly destined to score.

Brighton, who had offered little going forward, were now teetering on the edge of a possible mauling but made it through to the break without conceding further.

Ryan produced a good diving stop to repel a Firmino effort from distance at the start of the second half and the impressive Australian would also deny Virgil van Dijk from the resulting corner.

There was nothing Ryan could do in the 53rd minute however when Solanke finally opened his account for the hosts with a ferocious strike that cannoned in off the underside of the crossbar.

The goal was facilitated by a fine turn, run and pass by Salah, to take the Egyptian into double figures for Premier League assists, to go with his 32 goals.

Firmino should have made it 4-0 before the hour mark but shot too close to Ryan from 12 yards when unmarked.

A glut of substitutions, including the timely return from injury of Adam Lallana, contributed to a disjointed period there after as both sides looked increasingly content to hear the final whistle.

Liverpool did however add a fourth in the final five minutes via the excellent Andrew Robertson, who had earlier delivered a sublime cross for Lovren’s goal.

Like Solanke before him, it was the popular Scot’s first since his summer arrival on Merseyside.

For much of the afternoon Liverpool looked set for a third-placed finish but Spurs’ eventual 5-4 win over Leicester City at Wembley meant the Reds had to settle for fourth.

Regardless of that, Klopp described the afternoon as ‘perfect’ at his post-match press conference.

“Perfect final [day],” commented the German. “Of a very exciting season, a very intense season. We showed again the kind of football we couldn’t show in the last few games because the boys are humans not machines…

“I am so pleased and so happy for the boys that they showed up today again after one week of training, [at] not the highest intensity of course, just the things we thought make sense, and then having a game like this is really nice.

“We could have scored more, I think the biggest chances we didn’t use today, but I’m really happy we didn’t because Brighton wouldn’t have deserved that.”

On the subject of the season as a whole, Klopp added: “A fantastic, fantastic achievement from the boys, a really, really nice performance over the whole season. A few outstanding performances.

“It’s for us the next step and I am really, really happy and really proud of the boys because they gave everything in the season and now we have two weeks to prepare for another big game.“