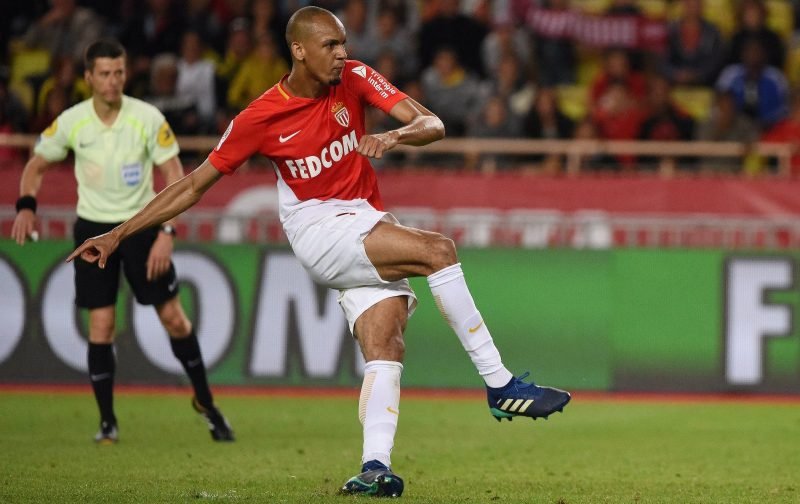 Defensive midfielder set to join from AS Monaco later this summer…

The dejection of losing the Champions League final to Real Madrid on Saturday will take a long time to subside, particularly due to the nature of the defeat, but there was at least a timely pick-me-up for Liverpool fans on Monday when confirmation of their first major summer signing emerged.

AS Monaco star Fabinho, who will officially become a Red on July 1, should help to fill a holding midfield-shaped hole that has long been devoid of a filler of the required substance for a club wishing to compete for major titles.

It’s a position the Reds have alarmingly struggled in, bar perhaps the enthusiastic but injury-prone Lucas Leiva, since the departure of Javier Mascherano back in 2010.

The lack of a specialist ‘DM’ has long been pinpointed as one of the key contributors, along with iffy goalkeepers, for a string of poor defensive records that have regularly undermined the club’s aspirations in recent campaigns.

Last season was an improvement in that regard, with the Merseysiders conceding 38 goals in their 38 Premier League games, but their weak core was still exposed on occasion, not least in heavy defeats at Manchester City and Tottenham Hotspur and a second half capitulation in the 3-3 European draw with Sevilla.

The need to add additional steel to the midfield was set to be increased further by the imminent departure of Emre Can, while Jordan Henderson, who is generally the deepest lying of the three central midfielders deployed in Jürgen Klopp’s preferred 4-3-2-1/4-3-3 formation, has never exactly convinced in his positioning or tackling – key traits of the No.4 role.

With two attack-minded full-backs and the front three pressing high up the pitch, the centre-backs are too often left isolated when attacks break down.

Therefore the addition of Fabinho should prove to be a masterstroke, albeit a somewhat obvious and overdue one.

According to the reliably-sourced Liverpool ECHO, the Merseysiders will pay 45m euros (£39.3m) up front with a maximum €5m (£4.4m) in bonuses for the former Fluminense and Rio Ave man, who has passed a medical and agreed personal terms on a long-term contract.

For a 24-year-old Brazilian international with over 200 senior appearances, a Ligue 1 title and plenty of Champions League experience to his name, that looks to be a cracking deal financially in the current market.

Rumoured interest in the player from the likes of Paris Saint-Germain, Juventus, Atletico Madrid, Manchester United and Arsenal helps to underline his quality and makes the speed at which Liverpool have tied up the deal all the more pleasing.

The fact that Fabinho isn’t going to the World Cup is also a massive bonus, with integration time into new surrounds and availability for pre-season friendlies often crucial in a new player adapting and settling.

With the much sought-after Naby Keita already on board, Klopp is well on his way to reshaping the midfield into both a more balanced and more dynamic proposition.

There remains plenty left to do on the transfer front however, with a new goalkeeper, a replacement for Philippe Coutinho’s lost creativity and another striker high up on most people’s wish lists.

The capture of Fabinho represents a great start though and he could well prove to be the most important missing piece of the puzzle.