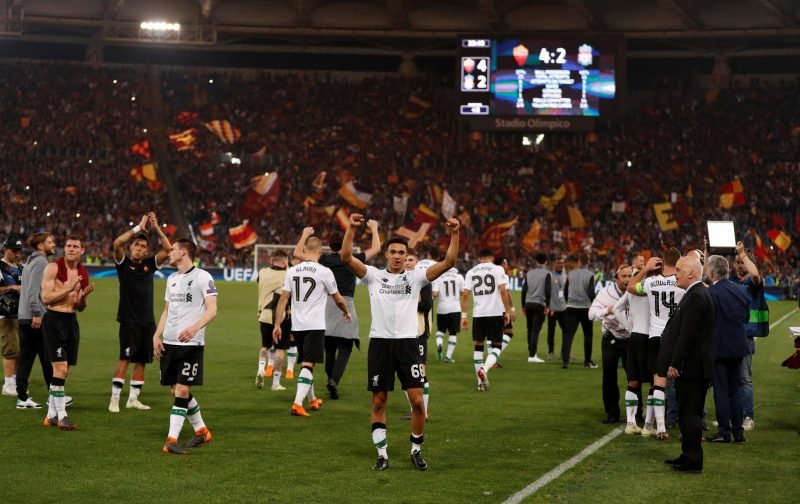 As is their want, Liverpool did things the hard way on Wednesday night, but ultimately they are into their 13th major European final.

Leading 5-2 from the first leg of their Champions League semi-final with AS Roma, the Reds arrived in Italy as overwhelming favourites to advance to the showpiece in Kiev on May 26.

However, after two late goals at Anfield, and with memories of their epic comeback against Barcelona in the quarter-finals fresh in the memory, Roma unsurprisingly refused to accept their fate without a fight.

Eusebio Di Francesco’s side, who were woefully suspect to Liverpool’s pace in the first leg, were noticeably defending deeper this time around but they still looked uncertain at the back with Sadio Mané unfortunate not to be awarded a penalty when pushed in the box.

A mistake moments later by Radja Nainggolan was ruthlessly punished by the Senegalese attacker as the Reds continued their run of scoring in every away game in the competition this term.

In doing so they also became the first away team to score at the Stadio Olympico in Europe this season.

On a personal note, it was the impressive Mané’s 9th goal in 10 Champions League appearances. Combined with the 10 scored by both Mohamed Salah and Roberto Firmino, Liverpool’s front three now have a single-season record 29 goals between them.

It was a short-lived lead however as the Italians levelled in fortuitous circumstances when Dejan Lovren’s attempted clearance rebounded off James Milner and flew past Loris Karius.

Liverpool responded well to the setback with Mané forcing a fine reaction stop out of Alisson following a great run by Andrew Robertson.

The resultant corner saw the Merseysiders take the lead again when a poor clearance allowed Georginio Wijnaldum to nod in from close range.

The goal was the Dutchman’s 19th since moving to English football three years ago but remarkably a first away from either Anfield or his previous home ground of Newcastle United’s St James’ Park.

Liverpool finally attempted to slow down a breathless first half in the closing minutes as the home players and supporters began to show some understandable signs of frustration.

Edin Džeko, who had been relatively quiet by his usual standards, was unfortunate not to win an early penalty at the start of the second half – a questionable offside call also saving Karius from potential trouble.

The former Manchester City striker was soon in the thick of the action and levelled in the 52nd minute when Karius poorly parried an El Shaarawy shot back into the danger zone.

Liverpool were continuing to be a constant threat themselves going forward, although mistakes and fouls were worryingly creeping into their general play.

A long ball over the top almost put Roma into the lead on the hour mark but substitute Cengiz Ünder couldn’t make enough contact, allowing a retreating Karius to save on his goal line.

A series of other nervy moments followed, while a desperate Trent Alexander-Arnold block should have resulted in a penalty when a goal-bound effort struck his arm and went over.

Both teams were proving sloppy in possession at this stage and more goals seemed a formality; Firmino forcing a good save out of Alisson in the 68th minute with a low shot from a tight angle.

The hosts, who still needed to score at least three more times to have any chance of making the final, were visibly starting to tire, but commendably continued to trouble Liverpool.

Džeko again tested Karius with 10 minutes remaining as Jürgen Klopp sent on Ragnar Klavan to beef up his defence, reverting to a back three in the process.

Nainggolan suddenly made things interesting three minutes from time with a wonderful strike from distance that went in off the post, but initially all it did was spur Liverpool’s travelling support into strains of You’ll Never Walk Alone.

A shocking refereeing decision – Klavan adjudged to have handled – gifted Roma another goal with the final kick of the game but it was not enough for the hosts to become the first team to ever overcome three-goal deficits in both the quarter and semi-finals.

This was Liverpool’s first defeat in the competition this season, and a first in five visits to the Stadio Olympico, but ultimately it mattered little and they will deservedly face defending champions Real Madrid in the final.

Discussing that prospect at his post-match press conference, Klopp remarked: “We were in the League Cup final and we didn’t win it. People don’t tell me in the street since then ‘thank you for bringing us to the final’.

“We were in the Europa League final. I didn’t see any trophies after these games. They don’t hang silver medals at Melwood. That’s the pity, that’s the game. So there’s still a job to do but that’s how it is.

“Going to a final is really nice – I did it a few times – but winning it is even nicer. We will be ready.

“You cannot be more experienced in the competition than Real Madrid. I think pretty much 80 per cent of the team played all these finals – four times in the last five years – and they are still together.

“So if we talk about experience, they are experienced and we are not. But we will be really on fire, you can imagine. We are looking forward to it but before that we have to play two more Champions League semi-finals in the Premier League. That is first of all the job to do. Then we’ll have two weeks to prepare the final and we will use that time.”

The first of those league fixtures is against top four rivals Chelsea at Stamford Bridge on Sunday.