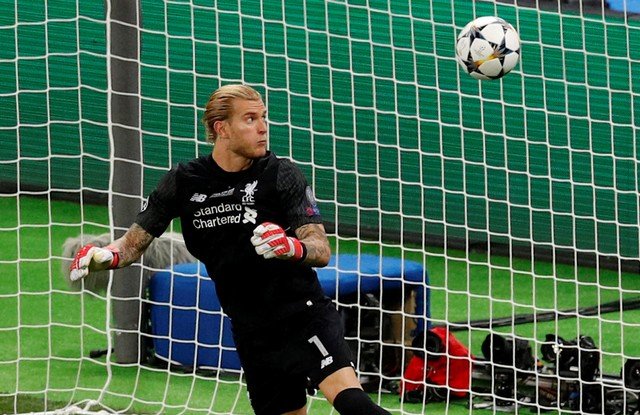 Jürgen Klopp’s side more than matched their illustrious opponents for spells of the game but were undone by two horrific individual errors from goalkeeper Loris Karius and the spectacular second half introduction of Gareth Bale.

The Merseysiders had started in positive fashion, taking the game to Madrid and forcing Keylor Navas into the main save of note in the opening half hour through Trent Alexander-Arnold.

Things started to go wrong thereafter when star man Mohamed Salah was forced from the field in tears with a shoulder injury sustained in a challenge by Sergio Ramos.

Without the dynamic Egyptian, who now looks likely to miss the World Cup, Liverpool lost a lot of their impetus and without the threat of his pace in-behind Zinedine Zidane’s team began to defend less deep and consequently started to claim possession in more advanced areas.

Six minutes after half-time Madrid took the lead when Karius, attempting a quick throw out, inexplicably threw the ball straight at Karim Benzema and watched in horror as it ricocheted back past him and into the net.

The goal was the attackers tenth in the competition this season, drawing him level with Salah and Roberto Firmino and making Liverpool the first team in history to have three players reach the mark in a single Champions League campaign.

Sadly that was as good as it got for the Reds as the 61st minute introduction of former Tottenham Hotspur man Bale swung the game decisively in Madrid’s favour.

Two minutes after coming on the Welshman scored perhaps the greatest European Cup final goal of all-time with a sublime overhead kick that combined athleticism and technique to devastating affect.

There was nothing Karius, or anyone else for that matter, could do about it, but the same couldn’t be said for Bale’s second strike seven minutes from time; the ex-Mainz shot-stopper palming his speculative effort from distance into his own net.

Bar striking a post through Mané with the score still at 2-1, Liverpool never really looked like finding a way back into the game after falling behind for a second time.

The final whistle yielded the usual contrast in emotions as the men in red slumped to the ground, dejected and inconsolable.

None more so than Karius who was eventually comforted by Madrid’s players before apologising to Liverpool supporters, who had unsurprisingly sung their hearts out from start to finish.

For Klopp it was a third major final defeat since taking over at Anfield and his sixth in seven since becoming a manager.

For the all-conquering Madrid it was a record-extending 13th win in the competition, and remarkably their fourth in five seasons.

Asked if he could have done anything differently post-match, Klopp responded: “We tried everything to win it, and I wouldn’t change anything in my preparations. I did the best I could and it was not good enough and I have to accept that, that’s it.”

On the impact of losing Salah, Klopp reflected: “It was a big moment in the game. I know if you say something like that after a game you lost, it sounds like you are a little bit a bad loser but it was, for me, kind of a harsh challenge; it’s like wrestling a little bit and it’s unlucky then that Mo fell on his shoulder. It’s a serious injury; worse, a really serious injury.

“The shock of the boys was obvious, we dropped a little bit deep and Real tried to use that for positive momentum, until we settled a little bit.

“It was quite difficult but 0-0 at half-time, we could adjust a few things – defending half-spaces, which we did before that really well, and then playing more football.

“And then the other decisive moments were the goals; they were quite strange, that’s how it is. We all know the result is 3-1 Real Madrid and that’s why we are not in the best mood obviously.”

It will be a long summer for everyone connected with the club but solace should be found in their performances and the progress made this season.

The future looks bright but for silverware to return to Merseyside key areas need to be strengthened, not least between the sticks.