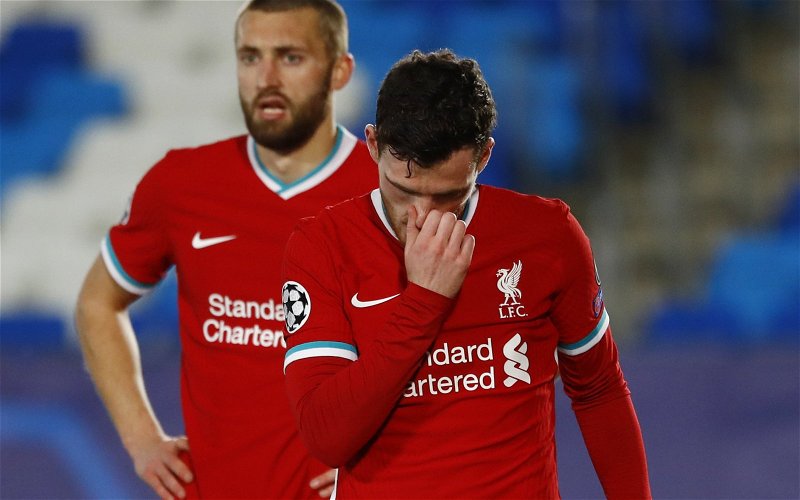 Last night saw Liverpool leave themselves with a real task ahead of next week’s second leg of their Champions League quarter-final against Real Madrid after the Spanish club cruised out 3-1 winners last night over Jurgen Klopp’s side.

The game started strange from the off, with Liverpool not getting much time on the ball and Real dominating possession early on and winning the midfield battle early on and the Reds failing to make an impact when in possession.

My initial thoughts during the first 20 minutes were that despite Real controlling the ball and gaining quite a bit of possession, they were failing to make much of that time on the ball and the Reds seemed to be defending relatively well.

However a mistake from Trent Alexander-Arnold led to Vinicius Jnr opening the scoring for the Spanish club and it seemed to go downhill from there, with Liverpool making rash decisions and lacking concentration and confidence.

We were slopped throughout and failed to turn the deficit around with Marco Asensio then getting in on the act not long after more poor defending.

Mohamed Salah managed to get an away goal to take back to Anfield which has given Klopp’s side the only bit of hope they have of turning the tie around, which was important but they struggled to build on that goal and soon let Real break away again, with poorer defending and a weak attempt from Vinicius which crept its way into the net to add Real’s third goal of the game.

The Athletics’ James Pearce was quick to react on Twitter after the final whistle with his verdict on the game, stating that the Reds have left themselves with a mountain to climb for the second leg at Anfield next week…

FT: Real Madrid 3 #LFC 1: Klopp's men have got a mountain to climb in the 2nd leg at Anfield next Wednesday. Improved second-half display after a wretched first half but exposed defensively. Vinicius Junior (2) and Asensio doing the damage for Real, Salah with the away goal.

It is hard not to agree with Pearce here, the performance has no doubt left Liverpool with a lot to do next week and against a Real Madrid side that could see the return of Varane, Ramos, Carvajal, and Hazard by that time which outs the Reds at even more of a deficit.

What do you think Liverpool fans, is Pearce right about the game? Let us know your thoughts in the comments section down below…