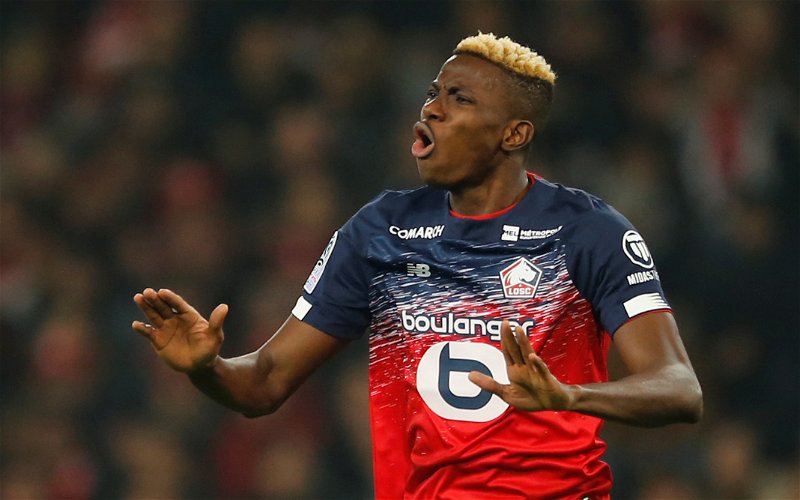 According to a report from Sky Sports Italia journalist Gianluca Di Marzio, Liverpool may have suffered a blow in their pursuit of Lille star Victor Osimhen – with Serie A giants Napoli looking set to ‘close‘ a deal for the 18-goal ace.

As manager Jurgen Klopp and sporting director Michael Edwards potentially scour the market for alternative forward options after our hesitant attempt to sign Timo Werner, it appears that Osimhen will not be moving to Anfield despite recent reports.

Napoli have also been hot on his trail over the last few weeks, and journalist Di Marzio claims they have now won the race to his signature – with it only being a matter of time before Gennaro Gattuso’s side officially secure a deal.

Likened to Arsenal star Pierre-Emerick Aubameyang, the 21-year-old has bags of potential judging by his impressive 18-goal haul this season – leaving little wonder why Liverpool were reportedly in the race to sign him.

After missing out on Werner to Chelsea, our options for a new centre-forward may have taken another blow in the form of Osimhen – with Klopp, at least for now, having to make do with main striking options Roberto Firmino and Divock Origi.

According to WhoScored, Osimhen has averaged more shots per game than Firmino whilst winning a far superior amount of aerial duels – potentially highlighting the fact he could’ve been a solid alternative.

However, given Fenway Sports Group’s transfer policy, it’s clear there may be cheaper options as Liverpool look ahead to the looming transfer window.