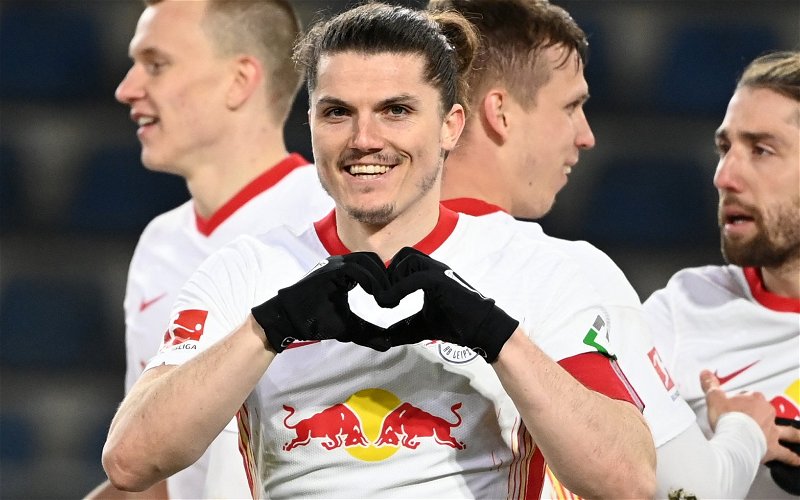 With the likelihood of Liverpool’s Dutch midfielder Georginio Wijnaldum leaving in the summer window with his current contract running its course, the club will no doubt be on the lookout for a possible replacement.

Plenty of names have been linked with a move to the club in the form of midfielders with the likes of Renato Sanches, Youri Tielemans, Sander Berge, Florian Neuhaus, and even Houssem Aouar. Recent revelations have shown that another individual has found themselves on this exclusive list of Wijnaldum replacements and that is RB Leipzig captain Marcel Sabitzer.

The Austrian midfielder has reportedly expressed desire to leave the club this summer and Liverpool along with Manchester United and Tottenham are interest in the 27-year-old’s signature according to German outlet BILD, as cited by AnfieldWatch on Twitter…

Liverpool are being linked with a move for Marcel Sabitzer. Sabitzer has expressed a desire to leave RB Leipzig this summer, with three English clubs said to be interested. They are Liverpool, Manchester United and Tottenham. #awlfc [bild]

Sabitzer is a fantastic midfielder and his performances against us in the Round of 16 in the Champions League are nothing to go by, as he was far from his best during those two fixtures with Liverpool producing some of their best football this season.

Of all of the options available in the summer, Sabitzer could be one of the more practical with his current market value at £37.8million according to Transfermarkt, meaning a deal in the region of £40million may be likely. Other options are likely to cost a lot more to secure their signatures in the summer.

Would you like to see Marcel Sabitzer at Anfield?

Whatever the club chooses to do, it is safe to say there are some more than adequate options available that the club is targetting and it will be exciting to see who they end up signing.

What do you think Liverpool fans, would Sabitzer be a good signing? Let us know your thoughts in the comments section down below…