“Massive turnaround”, “What a man” – Some Liverpool fans shower key asset with praise

Some Liverpool fans have heaped praise on manager Jurgen Klopp after his squad for his first-ever game was revealed.

Laurie on Twitter (via @LFC_Laurie) shared a photograph of the German tactician’s team for his first Premier League encounter against Tottenham at White Hart Lane back in 2015, with only James Milner, Adam Lallana, Divock Origi and Nathaniel Clyne in today’s squad.

The game ended 0-0 on that day and was the turning point of our fortunes, following the dismissal of Brendan Rodgers after the Merseyside Derby. 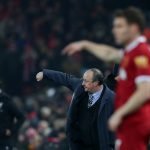 We all know what happened after this. Klopp went on to take us to three-straight European finals, winning the Champions League in Madrid, the Super Cup in Istanbul, the Club World Cup in Doha and is on the verge of capturing out first league title in 30 years.

Unsurprisingly, supporters drooled over Klopp and made their feelings clear towards him on social media. One fan said that he has produced a “massive turnaround”, while another simply said “what a man”.

That bench alone makes me retch

Dont think there was ever a worse bench than this, in the PL era, abs woeful ! What a man …. Jurgen Norbert Klopp 😎 #LFC