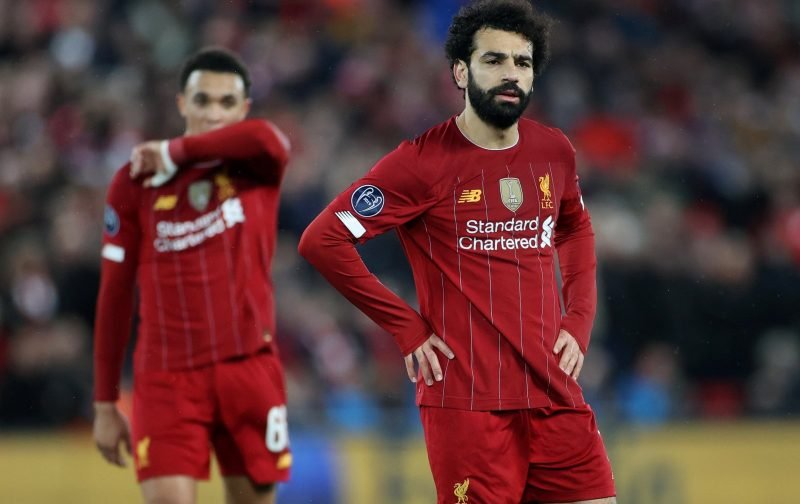 Liverpool’s front three of Sadio Mane, Roberto Firmino and Mohamed Salah is often considered as one of the best in world football, yet that hasn’t stopped the rumour mill from suggesting that the trio could be sold or replaced this summer.

Mohamed Salah’s record for Liverpool is sensational but some still regard him as dispensable. Would Jadon Sancho really be an upgrade? #LFC https://t.co/oIV2fbBe7U

Borussia Dortmund winger Jadon Sancho has, in recent weeks, been hotly linked with a move to Anfield, with The Daily Mail reporting that the Reds are one of many Premier League clubs keen on signing the 20-year-old superstar.

Yet there could be some logistical problems in Jurgen Klopp’s side making a deal for the England international happen.

A problem that James Pearce of The Athletic summed it up perfectly in a piece released this week focussing on Mohamed Salah, and why the Egyptian attacker remains integral to Liverpool’s plans despite rumours of Sancho potentially replacing the former AS Roma man, something lots of Reds supporters were happy to read about.

Here’s what many Liverpool fans had to say about Sancho replacing Salah on Twitter, with tons believing that it would be a poor move…

Sancho not on his level. Salah loses the ball a lot because he’s always trying to make things happen everyone else in our team is sideways and backwards

I dont actually know who in his right senses will disrespect Mo. Not even Suarez could match his numbers

Only Messi has contributed more goals than Salah since 2017. In what world would Sancho ever be in upgrade to Salah? Sancho has age on his side but Mo is smack bang in his prime

Salah all day long.. he can be frustrating but that’s because he’s trying to hard at times.. which is only a good thing. We want players that give their all.. which he does… king momo

With the likes of Manchester United and Chelsea also interested in Sancho, Liverpool could well be forced out of the battle for the Dortmund youngster, but how much of a miss that would prove to be is up for debate should Klopp keep Salah at Anfield.