Report: Ex-England defender urges Liverpool to sort out “a new deal” for star man who is “calmness personified” 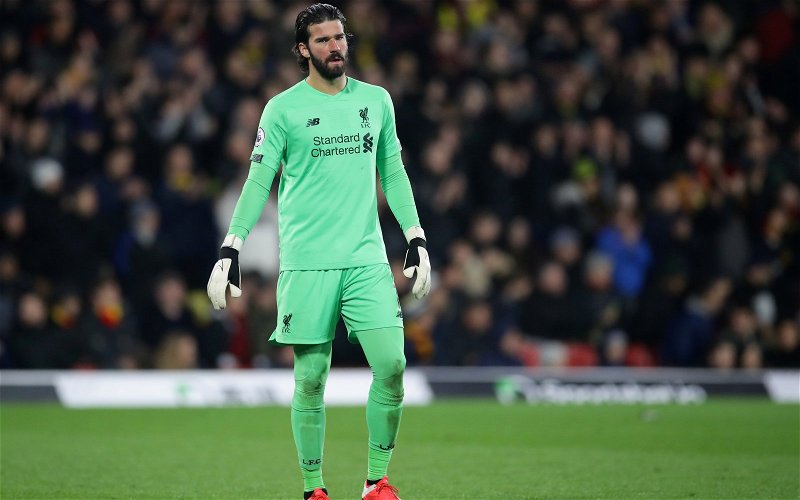 Former Leeds United fullback Danny Mills has hinted to Liverpool that they need to increase their efforts in ensuring Alisson Becker signs a new deal with the club.

The ex-England international revealed to Football Insider that the Reds will be doing themselves a favour in tying down the Brazilian international to a new long-term contract on Merseyside, with Alisson again having a standout season for Liverpool following his mega-money move from AS Roma in 2018.

Despite playing just 20 Premier League games this season due to injury, Alisson has been a unit at the back for the Reds this campaign, keeping 10 clean sheets and conceding just 12 goals, and for Mills, Liverpool should be doing all they can to get the 27-year-old on a new long-term deal.

The former Manchester City defender said: “It is very important Liverpool tie him down to a new deal. He is calmness personified. He is exceptional at what he does and gives everyone that assurance with that air of confidence that he has. We have seen goalkeepers go on to their late thirties and there is no reason that he is not of that ilk. Alisson keeps himself fit, as players do in this day and age, so there is every chance he could have a very long career.”

Alisson was seen by some as a risk following his then world-record move from Roma to Liverpool in 2018, but after just one season, the Brazilian has already proven to be a coup of the signing, with the goalkeeper cleaning up in individual awards in 2019.

And this campaign has again proved that the Alisson is one of the Reds’ most important players on the pitch and a key reason to their huge strides as a powerhouse in the European game, and that Liverpool should bolster their efforts in ensuring the Brazilian remains at the club well into the future.