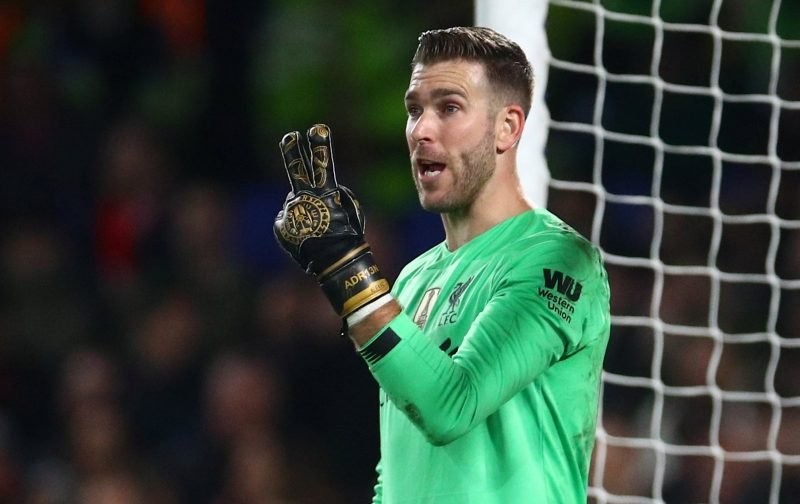 Speaking to Football Insider, the ex-Tottenham star believes that the Spanish goalkeeper read the passage of play completely wrong which allowed Willian’s shot to spill into the net despite the ball flying straight at Adrian, a mistake which cost Liverpool the game as the Reds fell to a 2-0 loss to Frank Lampard’s side.

Despite being signed as backup for Alisson Becker, Adrian has been used fairly often by Jurgen Klopp this season, with stats from Transfermarkt showing that the former West Ham keeper has played 16 times this campaign, with the Spaniard being the hero in the UEFA Super Cup as the 33-year-old denied Chelsea in the penalty shootout, yet Robinson was unimpressed with the shot-stopper’s efforts on Tuesday night.

The former Blackburn Rovers man said about the first goal: “At first you think it has moved or got a deflection but it did not. He completely misread it. He has read it as if it is going into the corner and when you look at it you think the ball must have moved a real long way. I think it was just an error, a misjudgement.

“It was a mistake and a lapse in concentration from him and you could see from his reaction he was frustrated and disappointed. It can only go down as a goalkeeping error, unfortunately.”

Adrian has quickly become a fan favourite at Anfield following his heroics in Istanbul at the start of the season, yet not many Liverpool supporters will be able to defend him for his antics this week which saw the Reds throw away their chance of a continental treble.

Tuesday night saw the 33-year-old shot-stopper play arguably his worst game since joining the Merseyside club, and although Klopp will likely keep the faith in Adrian going into next season, the Spanish keeper will need to prove yet again he is the ideal backup for Alisson despite this poor performance against Chelsea.