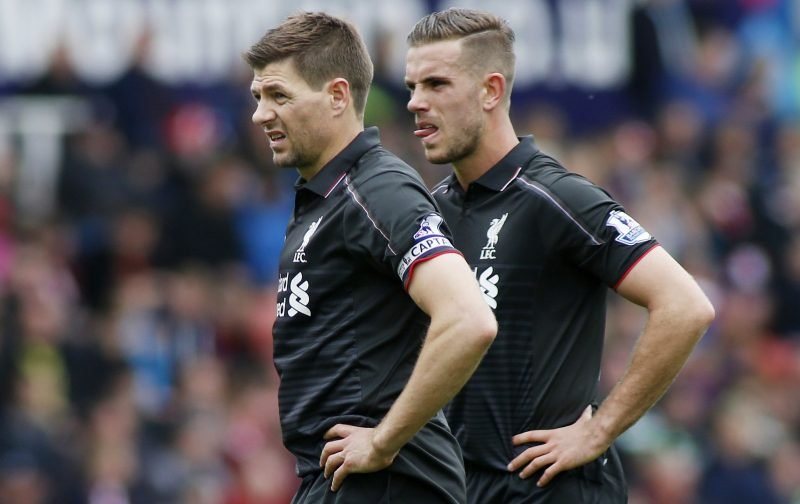 Former Liverpool captain Steven Gerrard was raving about midfielder Jordan Henderson now that he is finally receiving the credit that he deserves.

The England international is in line to win the PFA Player of the Year award after being tipped as one of the favourites to life the famous gong.

Henderson has had a fabulous 12 months for us. Having lifted our sixth European crown in Madrid last June. We are now on the verge of winning our first league title in 30 years as we sit 25 points clear at the top of the Premier League.

Speaking to Scotzine, Gerrard was full of praise for the £140,000-a-week ace who has thoroughly impressed the Kop faithful this season, who have rued his absence in recent weeks.

“We both know there are players who are “at it” every day. I appreciated Jordan’s power and fitness by training with him,” he said.

“Some players play for themselves, Jordan does the dirty running, grappling for second balls, 12 or 13km Saturday and Wednesday, again and again. Teams can’t function at Liverpool’s level without a cog like Jordan Henderson. He’s obviously going be a Premier League winner. I look at him and think: “Good for you”.

“He has that confidence now. He has lifted the European Cup above his head. I don’t deserve one iota of credit, he has done it all himself, but I remember a chat with Jordan in LA a while ago and he wasn’t sure whether he was coming or going at the club.

“I remember saying to him don’t give up on Liverpool, you’ll be fine. I knew what he had inside and that he would get there. You know with certain people.”

Jurgen Klopp has been singing Henderson’s praises all season and branded him as “outstanding“. His leadership qualities and never-say-die attitude are unique to the squad that has become a necessity for us to be able to compete.
He has three goals and five assists this season, along with an average of four long balls, 2.2 tackles and a pass success rate of 84.5% in the Premier League, which illustrates his all-round capabilities.
Previously branded as “Mr Marmite“, he has proved his critics wrong. Once upon a time, he was the biggest paradox, now he is a legend at Anfield.