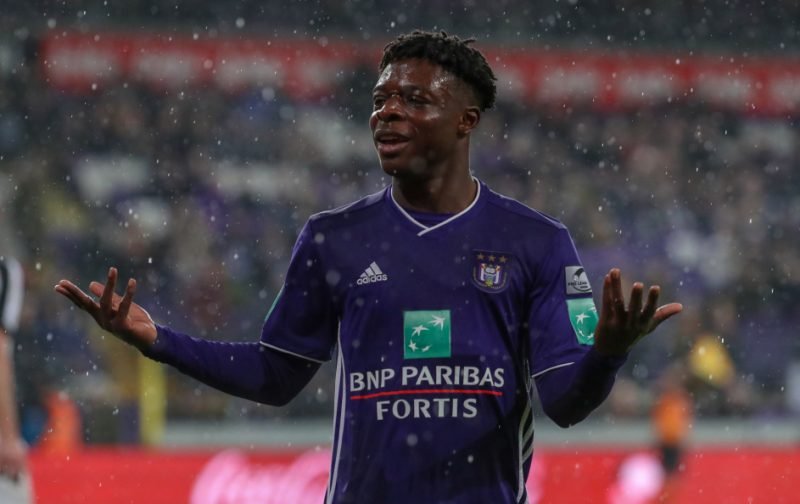 Liverpool are looking to reach a deal to sign Anderlecht striker Jeremy Doku, according to reports in Belgium.

The 17-year-old has had a stunning breakthrough year for former Manchester City defender Vincent Kompany and his team, scoring eight goals in 27 appearances in all competitions this season, as per TransferMarkt.

Doku has already picked up four caps for the Belgium U21 side as his rise to fame continues to soar through the Belgian landscape.

According to Het Nieuwsblad, the Reds have had Doku in their crosshairs for some time and could make an offer based on his recent good performances for Les Mauves et Blancs.

The report also claims that the youngster has no desire to leave the Constant Vanden Stock Stadium due to recently signing a new contract at the club, and is now tied down to the club until the summer of 2022.

Would you bring Jeremy Doku to Anfield?

With this in mind, Doku’s parents did tell Sport Witness that he was close to joining Liverpool and that Jurgen Klopp tried to convince him to make the move to Merseyside after hinting that he could the long-term successor for Sadio Mane.

Having also been a reported target for Real Madrid, the price to bring him in would be in the region of £131m (€150m).

That is an eye-watering amount of money for a player that has no experience playing in Europe, and just the one season playing in the Jupiler Pro League in his homeland.

It staggers me how ridiculous money is getting in football and the Reds would be insane to pay this much money for a player that will give you nothing guaranteed in return.

Liverpool should continue to develop the likes of Curtis Jones and Harvey Elliott, and focus on getting them up to speed in the Premier League. Do yourselves a favour.