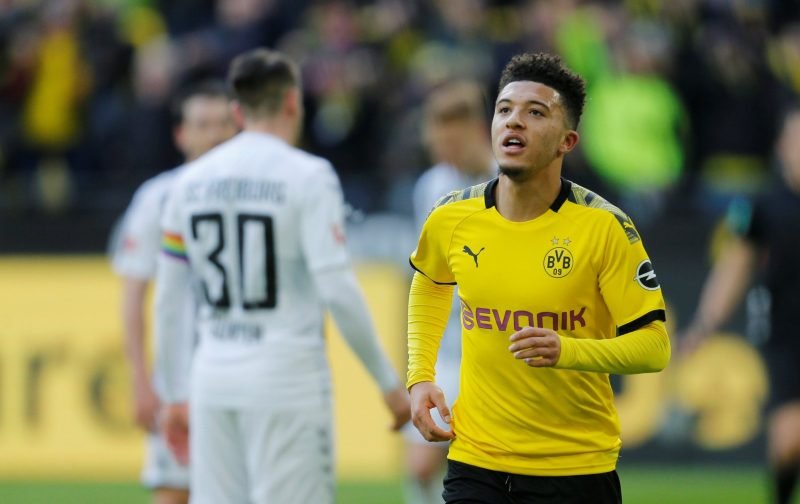 Borussia Dortmund have increased their asking price for England international Jadon Sancho are discovering that Liverpool are interested in the teenager attacker.

According to BILD, the Bundesliga giants have been alerted that Liverpool, as well as Manchester United and Chelsea, are keen in the 19-year-old winger who has continued to thrive for the Champions League side this season, with Sancho becoming the first teenager in league history to score 25 goals as well as besting his output for last campaign already as per Bundesliga.com.

With the report stating that Dortmund will now be asking clubs for €140m (£121.6m) should they come in for Sancho, Liverpool could well be financially pushed out for a move for the winger with Manchester United and Chelsea both seemingly keener than the Reds to chase after the 19-year-old superstar.

The Telegraph report that the Red Devils are leading the chase for Sancho, who could well become the most expensive signing in Premier League history should Ole Gunnar Solskjaer pull the trigger for the Dortmund winger, and the increased fee for the teenager should be the final nail in the coffin for Liverpool in their pursuit of the former Manchester City academy star.

With Sadio Mane and Mohamed Salah not looking likely on moving on anytime soon, the need for a new first-team winger is unnecessary for Jurgen Klopp, who looks keen on signing RB Leipzig attacker Timo Werner in the January transfer window with the German international recently praising Liverpool and reports continuing to ramp up about the Reds’ interest in the striker.

Sancho’s success story in Germany has been one of the best tales in football over the past two seasons, yet despite his incredible creative output for Dortmund this season, Liverpool will be wise to focus on other areas of the pitch where improvements could be made.