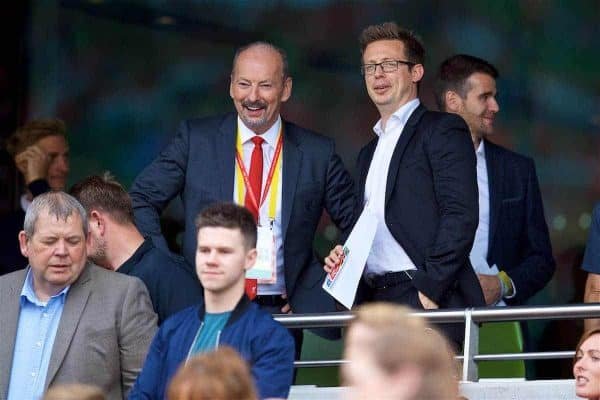 Many Liverpool fans were delighted with the club’s latest video that featured sporting director Michael Edwards.

There is little information online about the man, but his genius behind the scenes has led to him being described as the “Pep Guardiola of the backroom team“, who does not switch off.

He gained this title due to his incredible transfer business that he’s been able to pull off over the years. Not just with players coming into the club, but with funds that have been generated from departing players also.

After being appointed in 2016, he has orchestrated the moves of Virgil van Dijk, Mohamed Salah, Sadio Mane, Roberto Firmino and many more, as well as generate a significant amount of money for the likes of Danny Ings and Dominic Solanke.

Except Klopp, Is Michael Edwards the most popular staff member at the club?

The club’s official Twitter account posted a clip of Edwards trying to recreate Curtis Jones’ goal against Everton in the FA Cup in January for the “Stay at Home Save Lives” campaign, to help the fight against coronavirus.

Unsurprisingly, supporters were complimentary towards Edwards and his effort, making their feelings clear on social media. One fan said that he was “star-struck” by witnessing him talk.

Bournemouth watched this and offered to buy his shed for £70m