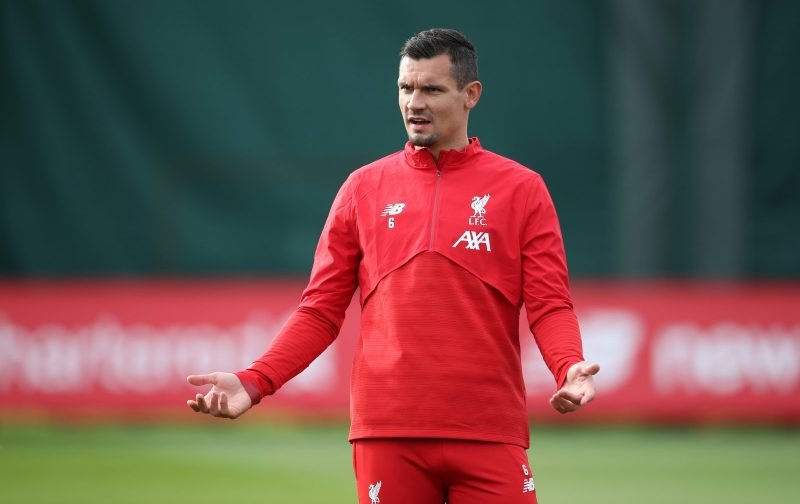 Plenty of Liverpool fans have been having their say on Dejan Lovren’s time with the Reds as his career stats were evaluated.

Anfield Edition presented his achievements on Twitter that showed he has scored eight goals in 184 appearances with Jurgen Klopp’s side over the course of six seasons, winning the Champions League in Madrid at the end of the 2018/19 campaign.

Has Dejan Lovren's time at Liverpool a success?

Despite scoring the winner during a famous European night against Borussia Dortmund, the Croatia international has made many high-profile mistakes over the years, despite talking a reasonably good game and titling himself as one of the best defenders in the world. He said this after he reached the World Cup final in Russia and Champions League final in Kyiv in 2018.

Because of this, supporters were not complimentary about Lovren’s Anfield career and made their feelings clear on social media. One fan went into detail about his tenure and concluded that he was a “likeable” character, but “never Liverpool quality”.

He’s produced some excellent performances and was very good for a spell alongside Sakho then Van Dijk but ultimately too many errors and woeful displays and stopped us going unbeaten twice.

Been here far too long as well. Likeable but never Liverpool quality.

6 – He’s had some fantastic moments along the way i.e the winner against Dortmund but he’s also had some shockers i.e that West Ham performance. One thing you cannot take away from him is his passion for the club, will always have time for Degsy ♥️

I’ll be honest think you’re being kind to him, 3/10 and that’s purely for the Dortmund goal. I remember at West Ham he tried to let the ball go out for a corner and they nicked the ball and scored, this was the day I realised I hated watching him.

4
Cost us 2 invincible seasons and a league title, and performances like his at Watford and Tottenham are not acceptable at any level.
But did make me scream for joy when we beat Dortmund.

lad has played 9 games in the PL this season and the ONLY game where we kept a clean sheet in those games was when he was subbed off after 40min against bournemouth.
think about that

6.5/10. He has been prone to some errors here and there, but our entire defensive line was like that for a little while there. His and Van Dijk’s partnership when Van Dijk first came to the club was very impressive I thought