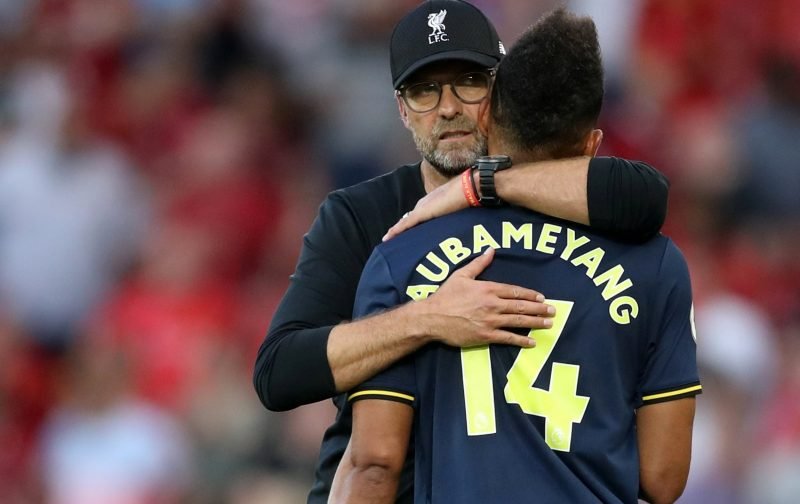 Liverpool are reportedly one of the two Premier League clubs interested in signing Arsenal captain Pierre-Emerick Aubameyang, who could leave the north London side in the summer transfer window.

90min claim that the Reds, as well as Chelsea, are both keen on the 30-year-old striker, who this season has continued his fine goalscoring form with the Gunners with the Gabon international hitting 17 goals in the Premier League. Yet with Aubameyang’s contract expiring in 2021 and Arsenal making little progress in renewing his deal, the former Borussia Dortmund star looks likely to leave the Emirates.

The joint Premier League Golden Boot winner last season alongside Mohamed Salah and Sadio Mane, Aubameyang has arguably been Arsenal’s best player since his arrival from the Bundesliga, yet with the north London club failing to qualify for the Champions League in their past two seasons and this year again looking unlikely, the attacker, who is valued at £63m on Transfermarkt, could be set to depart the English capital.

Although Arsenal might be unwilling to sell to a league rival, Liverpool have a fairly good case for themselves in landing Aubameyang, with the striker being signed by Jurgen Klopp during his time at Dortmund. The attacker also flourished into the player he is today while working with the German, with the French-born striker being involved in 57 goals (41 goals and 16 assists) under the now Liverpool boss.

Dubbed as a “world-class” attacker by Gary Neville via Sky Sports News, Aubameyang would be an excellent addition to the Liverpool squad and a more direct point of attacker compared to Roberto Firmino, who has not been utilised as an out-and-out striker under Klopp as Total Football Analysis report, whilst the addition of the Arsenal man could lead to the Reds having one of the most complete attacks in European football.