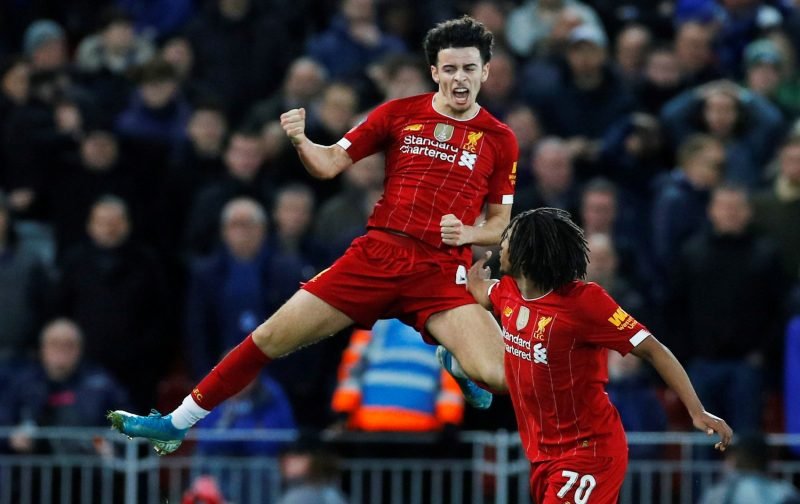 According to a report from the Daily Mirror, Liverpool manager Jurgen Klopp has no intention of loaning exciting youngster Curtis Jones out next season – with this report revealing that he could be given more chances in the first team soon.

Jones, who scored a stunning winning-goal against Everton during our FA Cup Merseyside derby tie, has impressed supporters when given the opportunity – with former Reds striker John Aldridge explaining how he is ‘very much like Trent Alexander-Arnold’ in a Sky Sports interview back in February.

The Englishman, who has made eight senior appearances for us this term, also earned Klopp’s admiration after the Everton game – with the German coach explaining how he is an ‘unbelievable player’.

Should Curtis Jones get more game time next season?

Jones also became our youngster ever captain during the 1-0 FA Cup fourth-round replay victory over Shrewsbury at Anfield, even scoring in the first tie as the Reds drew 2-2 at the Montgomery Waters Meadow.

This could potentially draw attention to the fact that Jones may have a bright future on Merseyside, especially given this update that our club has no intention of loaning him out next season. The midfielder, who could be helped by Adam Lallana’s impending free transfer away from Liverpool in the summer, more first-team opportunities look ‘set to come his way‘.

His record for the Under-23s side alone should draw attention to his potential, with the 19-year-old bagging nine goals and five assists in the Premier League 2 division this season as well as five goals in just four UEFA Youth League outings according to Transfermarkt.

Indeed, judging by Klopp’s apparent faith in the player, it looks as if we can expect to see a lot more of Jones over the 2020/2021 campaign.