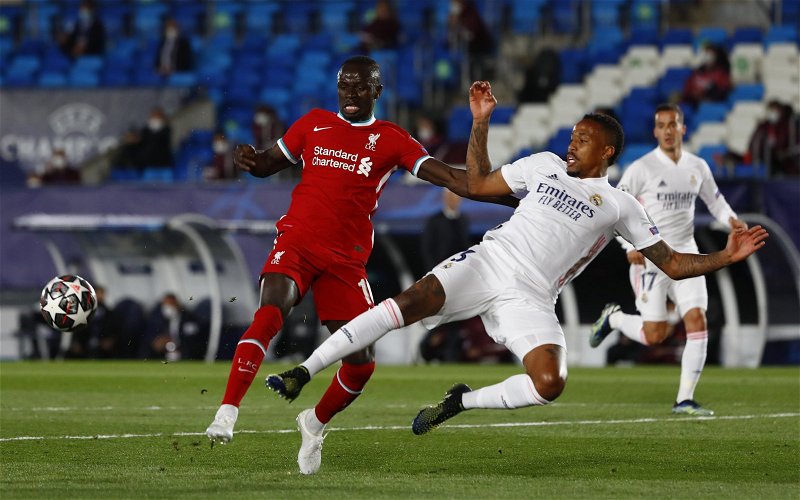 Liverpool made their return to the Champions League last night with a tough trip to Spain, which saw Jurgen Klopp’s side lose out 3-1 to Real Madrid, who have control of the tie after the first leg of the quarter-final match-up.

Going into the game it was a tough one to call with both sides not quite performing at their best this season but still doing well in Europe, and with Real suffering somewhat of an injury crisis before the game with the absences of Sergio Ramos, Dani Carvajal, Eden Hazard, and eventually Raphael Varane just hours before the game – it was advantage Liverpool before kick-off.

Sadly for the Reds, they failed to take advantage of that and one player, in particular, looked a world away from his usual abilities, and that was Senegalese winger Sadio Mané.

The 28-year-old has looked a world away from his goalscoring form of the last few seasons and has struggled this campaign with his decision-making and what seemed to be a lack of confidence, but last night was beyond measure.

At times throughout the game, he was let down by some poor refereeing decisions, but as The Athletic’s James Pearce said after the game, he allowed those decisions to affect him and he then dropped his head throughout the rest of the game and looked a world away from the Mané that we know can frighten defences and score goals…

.@JamesPearceLFC: "Mane struggled badly all night. A few decisions went against him and his head dropped." #awlfc [the athletic]

It was hard to see Mané essentially give up the way he did and his lack of confidence this season has been nothing short of a disaster, with him failing to continue the form in front of goal like his fellow winger Mohamed Salah.

The winger failed to make a single shot during the game and his performance was summed up by his attempted attack towards the end of the game where he broke away but was then stopped in his tracks by 35-year-old Luka Modric, failing to dribble past the midfielder.

Hopefully, the Reds can try and turn things around during the second leg next week but they have left themselves with a mountain to climb.

What do you think Liverpool fans, was Mané Liverpool’s worst player? Let us know your thoughts in the comments section down below…